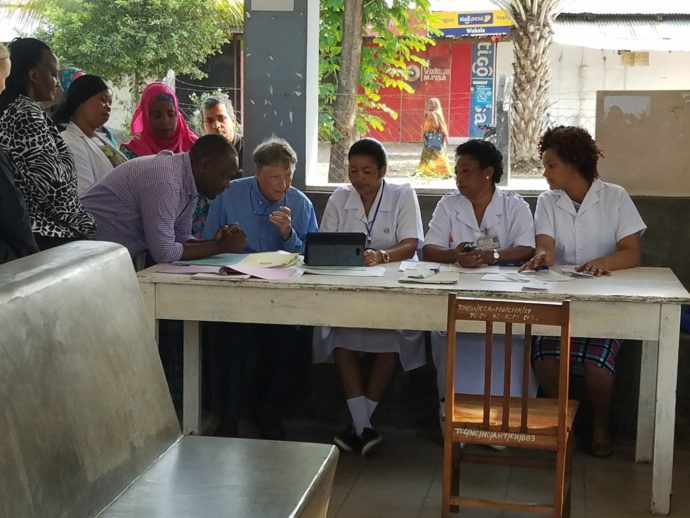 Last week, the BID Initiative was honored to host Bill Gates for a visit celebrating Tanzania’s progress and commitment to embracing a culture of data use within its health system. After completing the Arusha region, BID recently announced its plans to expand data use and data quality interventions to two new regions in the country – Tanga and Kilimanjaro.

During the visit, health workers demonstrated how these interventions are enabling more access to data and helping them make more informed decisions about how to deliver services. They also demonstrated how the BID Initiative has informed broader efforts in Tanzania to strengthen health data systems and data use in healthcare decision-making.

Visitors included Bill Gates and Dr. Dafrosa Lyimo, Program Manager for Tanzania’s Immunization and Vaccines Development Program, as well as Jonathan Mollel, District Immunization and Vaccine Officer of Meru District, Arusha, among other special guests. They arrived at Ngamiani Health Center, a facility in rural Tanga, and were greeted by facility in-charge, Dr. Angela Mashaka. Though data use and data quality interventions only recently expanded to the region, Nurse Millen Nkuzi said she was already seeing the results. The tools help her track her performance, enabling her, and her facility, to better meet targets. With Tanzania’s Electronic Immunization Registry (TImR) she can view snapshots of her vaccine stock levels on her tablet’s dashboard. TImR also allows her to identify true cases of children who have recently defaulted on their vaccines. 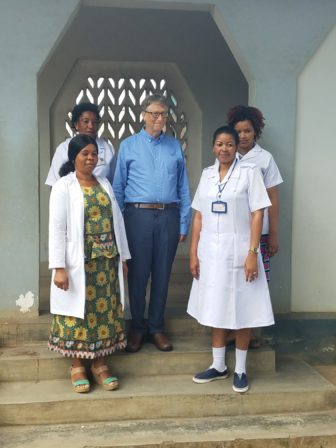 Also this week, the Data Use Partnership (DUP), which builds on the foundation laid by the BID Initiative and the government of Tanzania, announced the second phase of its efforts. While BID focused on using immunization as a proof point for the importance of improving data quality and use to improve overall health, DUP addresses the full health sector and positions Tanzania as a global leader in digital health.

In 2016, the government of Tanzania, with the support of PATH, conducted a landscape and gap analysis to assess and improve the use of data across the country’s health system. Based on those findings, with support from PATH, the government of Tanzania then developed a Road Map with 17 strategic investment recommendations to spur systemic change in data use practices. Recommendations range from enhancing and scaling notifiable disease surveillance, to digitizing hospital data.

In this next chapter, Tanzania’s Ministry of Health, Community Development, Gender, Elderly, and Children (MOHCDGEC), the President’s Office, Regional Administration and Local Government, and PATH will partner to implement Tanzania’s road map.

“As most any health worker will tell you, data often goes up, but it doesn’t come down,” said Dr. Mpoki Ulizubisya, Permanent Secretary of Tanzania’s MOHCDGEC during DUP’s launch event. “We need to solve this problem and support health workers to collect and use data. We need to use technology to make the data systems work for healthcare workers.”

The ambitious plan will improve data systems and data use in the health sector, allowing the government to better respond to disease outbreaks, identify underperforming health facilities, and manage complex health issues, such as HIV/AIDS, which require an understanding of patients’ continuum of care. As a result, health workers will be able to promptly respond to diseases spikes, administrators will be able to direct resources and staff to underserved areas, and at a national level, policymakers will be able to shape integrated health information systems and the tools to support them. At the core of these efforts, is a commitment to empowering health workers and enabling better decision making.

“The Government of Tanzania has made health data a priority, as part of its drive for greater accountability and performance,” said Bill Gates, Co-Chair of the Bill & Melinda Gates Foundation, which is funding the effort. “It has articulated a bold vision, strategy and policy framework, and has made great progress in establishing innovative information systems in immunization, HIV, and other areas. We believe Tanzania can be a leader in the region, helping its neighbors and all of us understand how to get better at generating and using health data.”