“This is what BID has convinced me of—for us to be successful in the long run, the technology can only take you so far. Once having demonstrated this is actually possible, it’s about promoting data use and getting buy-in from all key stakeholders until it firmly takes root.” 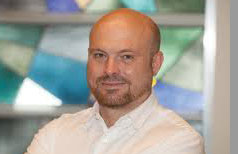 Matt Berg, the CEO of Ona, a Nairobi- and Vermont-based technology company, remembers one of the first immunization clinics he witnessed in Livingstone, Zambia. As a long queue of patients waited to be vaccinated, three health workers and one community health volunteer busied themselves with that day’s work. The community health volunteer weighed children, placing infants into a hanging canvas scale. Two nurses sat at a desk, immunization-related papers fanned out before them. As one pored over a paper registry, the other recorded data on a tally sheet and updated the child’s immunization card. A third nurse administered vaccines inside the clinic.

Matt couldn’t help but wonder what could be done to allow the small cadre of health workers to spend more time with patients, instead of administrative tasks. A more streamlined immunization process would make for shorter wait times and a more meaningful exchange between patients and nurses, and it would free up the workers’ time for other critical clinic tasks.

Despite global progress, one in five children worldwide still lacks access to lifesaving vaccines. The missing “fifth child” refers to the hardest-to-reach children in these communities, an estimated 20 percent of children globally, that health systems are chronically missing. Digital systems are increasingly seen as a solution to help locate and immunize these vulnerable children.

Matt had been working in mHealth for much of his adult career when the BID Initiative approached him in late 2016 with a request about what it would take to develop a digital platform for immunization. The BID Initiative was already partnering with developers on an electronic immunization register (EIR) based on the generic DHIS2 platform, but there were serious questions as to whether it could be secured, adapted, and scaled nationally.

Recognizing the importance of a rapid, iterative software development process, and the need to minimize costs and expedite timelines, BID turned to Ona with the Ministry of Health’s requirements. Since 2014, Ona had been developing a platform called OpenSRP. Its modular design can be adapted to different country needs and settings and a variety of health areas, including immunization. Though Ona had worked in other countries, including Pakistan, Indonesia, and Bangladesh, Zambia presented an opportunity to achieve much larger geographic and health worker coverage.

“BID has been catalytic for us,” explains Matt. “It gave us the chance to showcase OpenSRP’s potential, which is the culmination of years of blood, sweat, and tears.”

The Zambia Electronic Immunization Register (ZEIR), as it would come to be known, presented a break from many of the existing generic platforms that apply a one-size-fits-all approach to data collection.

“We evaluated the mHealth space closely and it’s our firm belief we will always have to compromise on user experience if we make something generic,” he says. “By generic, I mean a form-based app that you can use for immunization, antenatal care, or any other health workflow. We figured that a lot of kids get immunized each year, so why not give health workers an interface optimized for immunizing children.”

Matt added, “We have also seen great value in the approach of creating a very standardized app, in that it makes it easier to build a global community of practice around it. The ability to compare notes between teams running the same app in Bangladesh and Zambia has been invaluable.”

To design a system that was truly functional, Ona convened a series of design workshops. Using interactive prototypes, they asked health workers to define the basic system requirements. They also studied the daily routine of health workers under the current paper system. Witnessing scenes like the one described above, where multiple nurses were assigned to various tasks of vaccinating children, helped inform a series of use cases, or scenarios, in which health workers were likely to interact with the system. In doing so, Ona was able to design ZEIR for multiple contexts. These findings led Ona to get rid of data entry forms whenever possible, giving the immunization interface its unique look and feel.

Of course, ZEIR has not been without its challenges. When Ona first began work on ZEIR, it had just two weeks to translate system requirements into visual designs and workflows. Ona had a similarly aggressive timeline to develop and pilot the system before broader rollout.

Matt cautions that while ZEIR has been largely triumphant, the real test lies ahead. ZEIR was designed for national scale-up and its success depends on the government’s ability to secure sustainable training mechanisms, funding sources, and health worker buy-in.

“This is what BID has convinced me of—for us to be successful in the long run, the technology can only take you so far,” says Matt. “Once having demonstrated this is actually possible, it’s about promoting data use and getting buy-in from all key stakeholders until it firmly takes root.”