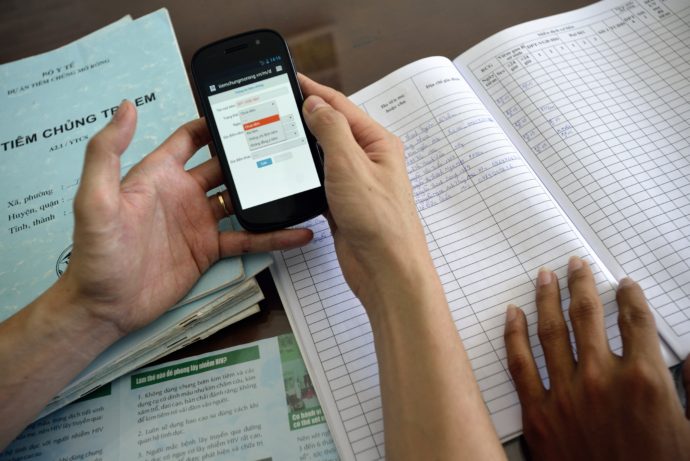 Photo: WHO/Mark Leong. The national launch of a digital immunization registry PATH co-developed with the government of Vietnam and telecommunications company Viettel, presents important lessons and best practices for other country efforts.

It used to take Ms. Linh more than a day to generate a list of immunization patients at the Phu Hung Commune Health center in southern Vietnam. Ms. Linh was responsible for manually entering each name and record into paper registers before personally delivering invitation letters for the upcoming clinic. These days, it takes a fraction of that time – just 15 minutes on the computer.

“It was costly and time-consuming for health workers,” remembers Dr. Nguyen Tuyet Nga, Vietnam program director at PATH. “And sometimes these paper letters never reached parents, or the parents would forget they were due for a clinic visit.”

By 2008, Vietnam had reached national immunization coverage rates of over 95 percent for all EPI vaccines except Hepatitis B birth dose, but many health facilities faced stock shortages, reporting errors, and challenges with on-time vaccination. Without an accurate understanding of its target population, calculations were often based on estimates and disguised important inequities in rural and poor parts of the countryside.

Fortunately those trends are reversing, thanks to an ambitious system that greatly reduces the time and costs associated with local routine immunization programs.

In 2012, PATH began working with Vietnam’s National Expanded Immunization Program (NEPI) to improve coverage rates by developing and testing a digital registry called ImmReg, a software application to track the vaccine status of women and children in Vietnam’s Ben Tre Province, and a vaccine tracking tool, VaxTrak. In five years, ImmReg and VaxTrak, grew from a district-level pilot to a central piece of the country’s health system, as part of the National Immunization Information System (NIIS) launched last month by the Deputy Prime Minister. Its success demonstrates the demand and potential for quality, accurate data to improve health outcomes. It also presents telling parallels to the BID Initiative’s efforts in Tanzania and Zambia.

“ImmReg and VaxTrak showed how comprehensive digital systems could not only reduce the burden for community health workers,” says Nga, “but also increase immunization coverage, especially for the on-time delivery of essential vaccinations for children under one year of age.”

Despite the different health contexts and thousands of miles separating the two initiatives, ImmReg has lessons directly applicable to the BID Initiative:

The potential of ImmReg to have impact throughout Vietnam’s health system was clearly apparent. ImmReg was demonstrated to lead to significant time-savings, transforming report generation from a 20-minute process to a 2-minute task. In a final evaluation of the project, on-time delivery of vaccines was shown to increase by 20 percent across 164 health centers in Ben Tre Province. Early registration also improved. Newborns are now registered an average of 8.5 days after birth, compared to 33.4 days before the rollout of the digital registry. PATH estimates that switching to a system of SMS text message reminders, instead of paper invitations, could save the Vietnamese government USD 673,000 annually if scaled up nationally. This evidence led to the MOH integrating ImmReg and VaxTrak into the NIIS, through a collaboration with Viettel, one of the biggest telecommunications companies in Vietnam.

As the BID Initiative enters its final year, Vietnam offers a case study in how data can revolutionize primary health care. Like BID, ImmReg, as it has evolved into the NIIS, prides itself on being entirely owned and championed by local government and its recent expansion positions Vietnam as a global leader in digital health.