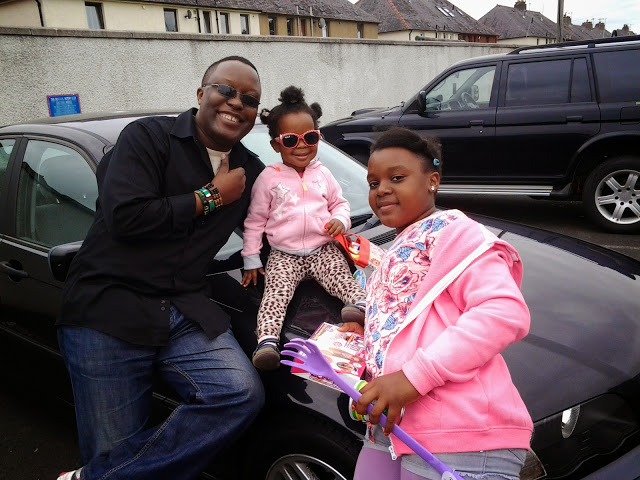 Apollo with his daughters – Annella and Arabella.

The BID Initiative team works across three countries in the United States, Tanzania, and Zambia. This week, we learn more about Apollo Temu, Deputy Director in Tanzania.

What is your role on BID? My primary role is to assist the Country Director, providing an overreaching leadership and view across BID and other projects in Tanzania, ensuring that the work streams of multiple teams are on track, while laying a key internal leadership role ensuring efficient management of resources, and facilitation of internal and external communication with key partners in Tanzania and beyond. In the process, working directly with various national and international stakeholders and other partners to select, adapt, and scale appropriate ICT interventions for long term use in the country.

What’s the hardest thing you’ve ever done? The hardest thing was to accept the major loss in my family when my father passed away tragically. It was like a trigger to a series of lifetime events/changes! Awful experience! But in some situations, understandably necessary!

When you were a child, what did you want to be when you grew up? One may not believe this but actually, I was under 5 and I wanted to become a soldier, an army man! I had my older cousins who had joined the army and I admired their uniforms and the orderly manner things were conducted! My father had this large book on the History of WWII in our home library and I could look at the pictures of young soldiers and someone much older than me told me a story that they grew up and fought for their country and freedoms! I was fascinated by that! Strange eh!

If you could choose anyone, who would you pick as your mentor? I am inclined to say my late father, but I learned a great deal from him already, so as a mentor to pick I guess that would be the First President of Tanzania, Mwalimu Julius Kambarage Nyerere. I admired his humility, charm, principles, and his true love of people’s development!

What is one of your favorite quotes? “Law, not confusion, is the dominating principle in the universe. Justice, not injustice, is the soul and substance of life. And righteousness, not corruption, is the molding and moving force in the spiritual government of the world”. (Author of As A Man Thinketh, James Allen 1864 – 1912)

What do you like most about your job? Getting up in the morning and knowing the difference our teams makes as being part of bigger picture in driving transformative innovation to save lives globally, with a focus on mothers and children, and more particularly with respect to influencing the same in Tanzania. Shaping the use of technology as part of toolsets to achieve such grand effects, is something I am quite passionate about, especially when teaming with like-minded and well versed and committed colleagues across the globe.

“Apollo brings to the team his sense of community and compassion for bringing people together and support for each other to achieve their goals. Apollo has hit the ground running from the day he started and he has been an excellent addition to the team. I have really enjoy working with him and his excellent advice and leadership has always been extremely useful.”- Henry Mwanyika, Tanzania Director, Tanzania