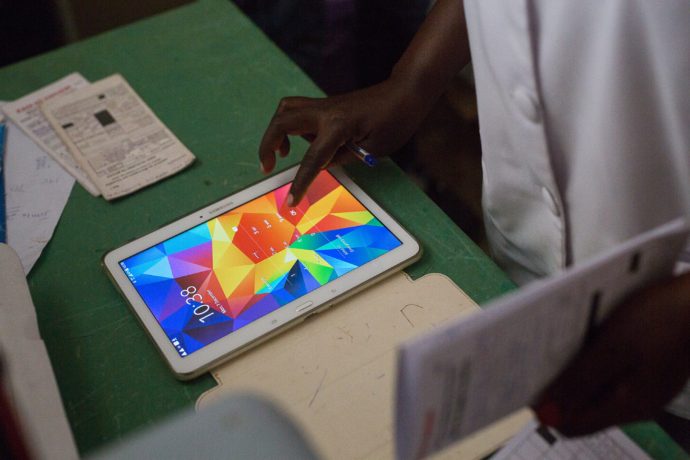 Progress and growth is often a nonlinear process. Sometimes it’s accompanied by significant gains and great leaps forward, and other times it is slow and steady. In keeping with this trajectory, the BID Initiative’s mission to improve data quality and data use in Tanzania and Zambia has – at times – been a rollercoaster of a ride. But both our successes and challenges have helped us get to where we are today.

In Tanzania, for instance, BID initially deployed a system called the Tanzania Immunization Information System (TIIS), which first rolled out to Arusha Region in 2015. During system development, a clear picture emerged of what BID wanted to achieve and how, but in the process, stakeholders identified gaps and areas that could be improved on. TIIS, for instance, was slow and often experienced frequent system crashes, making it difficult for health facilities to keep up on busy clinic days. TIIS also had difficulties syncing, which meant facilities with multiple tablets couldn’t use the vaccine queue or generate accurate reports.

Discussions held with the Ministry of Health, Community Development, Gender, Elderly and Children, BID’s User Advisory Groups (UAG), and other relevant stakeholders led to the development of an improved system, called the Tanzania Immunization Registry (TImR). When TImR was introduced in late 2016, TIIS had already been rolled out to all health facilities in Arusha Region, and thus data needed to be migrated over to the new system.

The process started at the beginning of December 2017 and is now nearly complete with 97% of all Arusha facilities now using TImR. It was done hand-in-hand with the training of district data use mentors (DDUMs), who were then tasked with training and providing support to health care workers (HCWs). Migration was an important activity for HCWs, many of whom had been using TIIS for a couple of years now. It was critical not to lose the data migrated from TIIS to TImR. Fortunately, thanks to our careful planning and precise coordination with help from the Ministry, the data migration was a great success.

“My biggest worry was losing the information of the children that we have been collecting [for] almost three years now,” explained Lucy Sanday, a reproductive and child health (RCH) nurse at Kaloleni Urban Health Centre. “We are one of the clinics that see about 100+ children in one [immunization] session. I was not sure if I would be okay, since it would have been very tiring collecting this information again. To my surprise, all the children that come to the clinic, who had been registered [with TIIS] can be found [in TImR].”

After training, HCWs started to use TImR’s improved system and BID was eager to hear from them about the new experience. After all, their feedback and experiences helped inform the system redesign.

“I understand [TImR] better and it was easy to [adjust] when the trainers had come to orient us on the changes,” said Joseph Buyi, a medical attendant at Kansay Health Centre. “All in all, I see great improvements and my job could not be easier.”

TImR offers HCWs many new functions that weren’t previously available with TIIS. HCWs, for instance, each have their own unique login, with the ability to customize their dashboard view and profile page. TImR also has improved syncing, which makes the vaccine queue easy to use for facilities with more than one device, and allows HCWs to order stock directly from the system. Its easy navigation, automatic reports and colorful data visualizations help HCWs to understand and improve upon their performance.

“Having separate login accounts for each HCW has made my supervision job easier…We all know who was working at the clinic on a particular day,” said Salome Mbegela, an RCH in-charge and assistant District Reproductive and Child Health and Care Officer at Meru District Hospital. She notes that data accuracy has also improved, “since everyone makes sure they have entered correct information. Everyone has become responsible because they know they will be held accountable. There are also great improvements in the sync functionality. We are a big hospital and have to use the queue function for smooth service delivery.”

Earlier this month, BID convened an analysis meeting with the UAG team who has been involved in the migration process. A discussion was held on data quality, stock issues, reports and score cuts to support supervision. Members were very positive about the shift and favored the new system, as it has incorporated most of the functionalities they need to improve performance and overall service delivery at their facilities.

“I’m happy that I don’t have to make a phone call to [District Data Immunization Officers] for vaccines and supplies because I can order directly from the system. This change will also bring about data quality,” explained Scola Nselu, an RCH nurse at Mareu Rural Health Centre. “Other things, like being able to register a child without a barcode when I run out, or registering a newborn who doesn’t have a name, [also] make my job easier.”