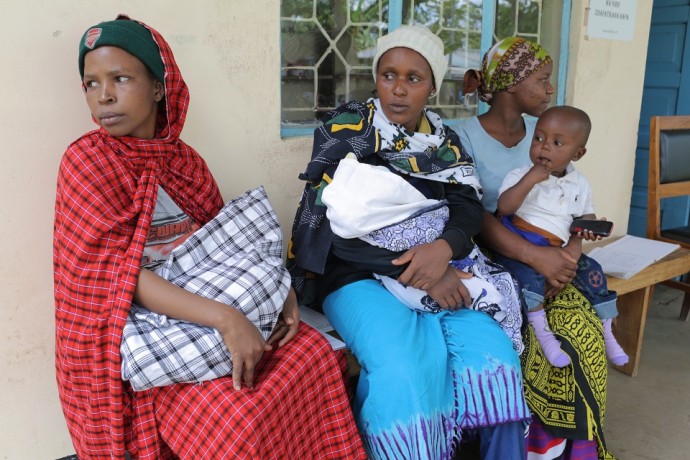 Photo: Not Just Malaria/Jacqui Thornton. Maasai women waiting for their children to be vaccinated.

In 2007-2008, she was among the health workers assigned to the vaccination campaign in the Maasai community to help control a measles outbreak. Along with other health workers, they educated the community, and specifically the elder men, to conduct a vaccination campaign which successfully reduced the number of cases. “In the last three years, the community is happy because [there’s] no disease and children are no longer getting sick from measles,” explains Angela.

Superstitions play a large part in parents hesitating to immunize their children. Angela and her team needed to gain the trust of the parents by educating them on the importance and the lifesaving benefits of immunization. Thankfully, their efforts paid off as many parents now take immunization schedules seriously.

Furthermore, the Tanzania Ministry of Health and Social Welfare (MoHSW), a key partner to the BID Initiative, is making sure all children under-five years of age in Tanzania are protected by the measles vaccine. Angela said the MoHSW provides education on what to do if a child has measles to assure all children receive the care they need and to prevent the disease from spreading among the community.

Currently, it is difficult to track a child’s immunization history if a child moves and visits different health facilities, which is often the case with the Maasai community. The BID Initiative is designing solutions such as the national electronic immunization system, to allow health workers to have visibility into all children’s immunization schedules, ensuring they do not miss a vaccine and receive full protection from deadly, vaccine preventable diseases.

Angela believes that continuing to increase awareness on the importance of immunization among rural communities is critical to improving immunization coverage and in turn protecting kids from harmful diseases to create healthier communities. We couldn’t agree more and are fortunate to work with health workers like Angela who will be key to our success in designing solutions in Arusha for better data and better decisions for better health outcomes.