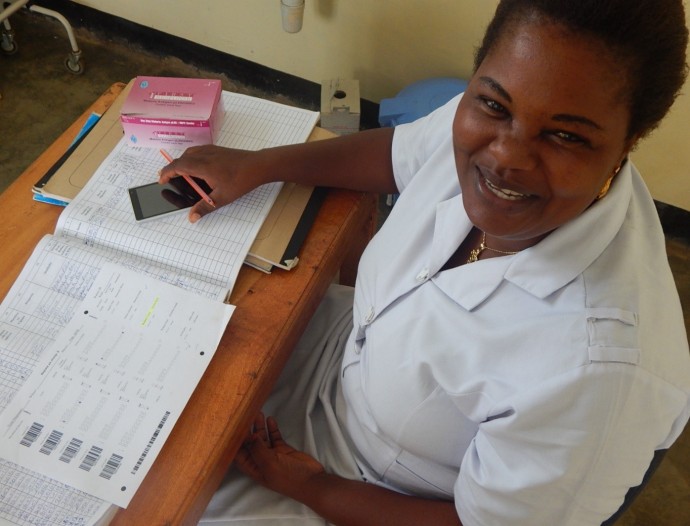 Photo: PATH/Joseph Hakili. Matrona identifying children who did not show up for a scheduled vaccine so she can follow up.

On a recent visit to Terrat Dispensary in Arusha City Council district, I sat down with nurse Matrona Silayo to discuss her role and how the new electronic immunization registry is positively impacting her work. At the facility, Matrona’s role largely involves work in the Reproductive Child Health clinic to manage stock, administer vaccines, create reports, and educate mothers on general child health and immunization.

Matrona told me she became a nurse because, “I have always admired health care workers’ compassion, especially towards children. It is for that reason mainly that I decided to get into health care. I also liked how smart nurses looked in their white uniforms.”

Routine health education for mothers is vital in promoting the need to fully immunize children, but only includes those already attending clinic. Many children miss subsequent vaccinations and are difficult to trace. Additionally, home births are not easily accounted for, therefore an unknown number of children are left susceptible to vaccine-preventable diseases. Currently, Matrona must commute long distances to reach community health workers who record home births. However, she is often unable to make the journey due to transport difficulties. Additionally, Matrona and her team do not know how many children to expect at Terrat Dispensary each month due to poor data visibility in the current immunization registers, making it difficult to project vaccine supply and leading to frequent stock outs.

One of the BID Initiative’s core interventions, the national electronic immunization registry system, includes solutions for health facilities in two different settings—those with access to electricity and internet, and those without. For connected facilities with adequate infrastructure, we are implementing electronic forms on tablet PCs. For facilities with poor connectivity, we are implementing paper forms that can be scanned into the national electronic system at the district level. The volume of vaccinations per month is another criterion for implementing electronic versus paper registries. The Terrat Dispensary where Matrona works is a public, peri-urban health facility with pastoral communities and urban settlements. The facility delivers a low volume of vaccinations each month and is classified as a paper facility.

Through Tanzania’s electronic immunization registry, a child is tracked from birth through electronic registration in health facilities and SMS registration in communities. A child’s record is then centralized and can be accessed at vaccination points and health facilities where a barcode is placed on the child’s health card. These barcodes will uniquely identify them for the duration of their immunization schedule and SMS reminders are sent to their caregivers if they did not bring their child for a scheduled vaccine.

For paper facilities like Terrat, the district immunization officer generates and prints the following forms from the registry: a list of children with their monthly vaccination schedule, new registrations, and weight and stock tally per facility for their district. Matrona collects paper forms for her facility at the start of the month and completes these simple forms along with a child record for all those who show up for clinic. 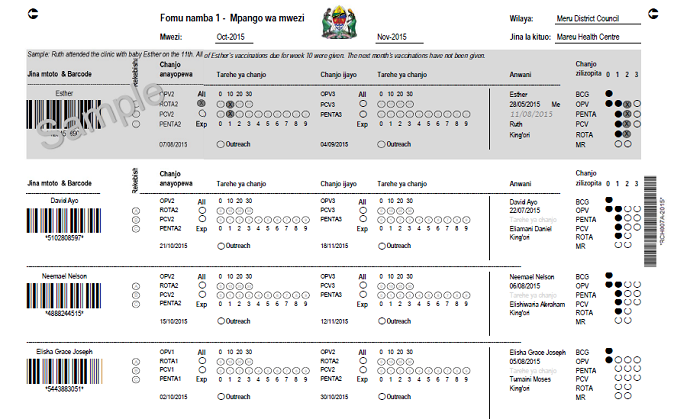 An iteration of a paper form- monthly plan.

Come the end of the month, she tears off the perforated part of these forms containing the children’s record and phone number of the mother or care taker, and hands the rest back to the district office to scan and print for the following month.

“I can now plan efficiently for immunization because I now know the number of children to expect every month, I can also identify and trace children that did not come for follow-up. The immunization registry will help us reach a significant number of additional children for vaccination.” says Matrona.

Matrona’s outlook on reaching more children with the help of Tanzania’s national immunization registry is one of enthusiasm and hope of a streamlined and efficient service delivery system. The success of the immunization registry through the BID Initiative and its other interventions will go a long way to materialize Matrona’s hope which is representative of many health care workers.