By Gavi, the Vaccine Alliance

The following post appeared on Gavi’s Got Vaccines? Got Life! blog.

In the harsh, dry highland plains of the Ngorongoro region of Tanzania stands a small red tent – a tiny speck of colour in an otherwise dusty, lifeless landscape.

It can be seen from several kilometres away, and that is precisely the point. Because even before Bakari Shemagembe, the local Assistant Medical Officer, and his team have finished setting up around the tent, the local Maasai tribespeople start to arrive, trickling in from all directions, drawn towards this beacon.

Carrying their infants, they travel on foot for hours, then wait patiently for the medical team to finish their preparations. Outside the tent, a folding table and chairs are set-up, as well as weighing scales, which are hung from a solitary tree, the only source of shade in the blistering heat.

Finally, when the team is ready to begin, they turn on a wireless digital tablet.

Part of Tanzania’s new Electronic Immunisation Registry (EIR), this shiny gadget looks futuristic and out-of-place against a backdrop of crumpled paper records and traditional tribal dress. But with the swipe of finger, its role becomes clear. On its screen appear the medical records of a mother and infant, instantly showing the team which vaccinations that child needs.

This new digital register is transforming immunisation in hard-to-reach parts of Tanzania, says Shemagembe. In the past, his team had to hope that families and health workers would bring the correct paper records to outreach sessions, to know for certain which vaccinations a child had received. 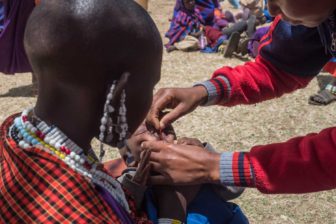 This is particularly important when providing healthcare to Maasai, whose children are often invisible to health workers, making it difficult to ensure they receive all their vaccinations, on time. Maasai often live in remote communities in rural areas that are difficult to reach, and because many are nomadic, they do not always attend the same clinics.

The EIR enables health workers to proactively track which children are missing out or defaulting. In the past, this would involve regularly going through each child’s paper records, a time consuming and error-prone process. But with the EIR system, the tablet automatically compiles a list, enabling Shemagembe to follow up with parents, either by contacting them by text message or via tribal leaders. This, he says, has helped boost immunisation coverage in his Nainokanoka district from just 59% in 2013 to above 97% today. 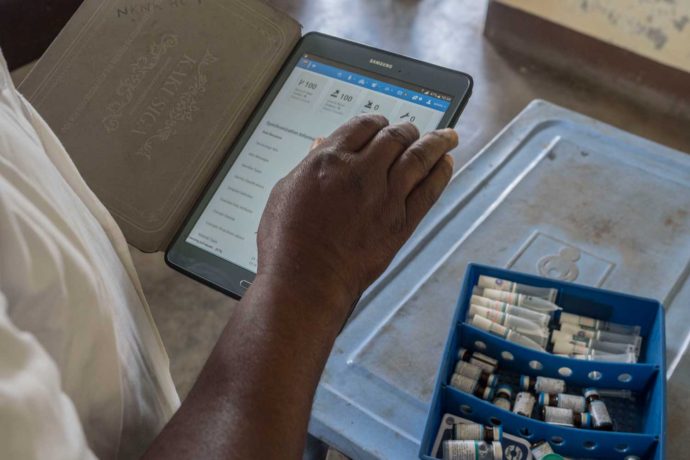 Shemagembe is not alone. The innovative tablet-based system is being trialled at 1,279 health facilities within 33 districts across four regions of Tanzania.

The country already has a good immunisation record, maintaining a high national immunisation coverage of above 90% over the last decade. The EIR is now helping address pockets of low coverage that exist within certain districts.

In a country where barely half the children born have their births registered, Tanzania has one of the lowest civil registration records in the world. This makes it even more difficult to reach those children who are missing out on healthcare, not least because too often there is no formal record of their existence. The EIR is helping to address this.

When mothers give birth at health facilities where a skilled birth attendant is present, the child is immediately enrolled onto the EIR. Those born outside of such facilities are enrolled by community leaders, or by health workers at their first vaccination.

Both help ensure that children can be identified and tracked as they grow. That ensures they receive protective vaccinations, and other health interventions such as nutritional supplements and pills that prevent parasitic intestinal worms, which can cause illness and malnutrition.

Meanwhile, in the privacy of each tent, mothers can receive sexual and reproductive health interventions. 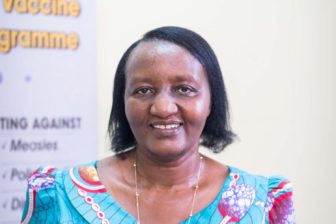 Created as part of Tanzania’s BID initiative, the EIR is a country-driven project. Though produced by PATH, with support from the Bill & Melinda Gates Foundation, Tanzania’s Expanded Program for Immunization Manager, Dr. Dafrossa Lyimo, played a central role in its design.

For example, she ensured the Electronic Immunisation Register was integrated with the country’s Vaccine Information Management System (VIMS), another paperless system which now monitors and facilitates vaccines supply levels, and the equipment used to store vaccines at cool temperatures, across the country.

This integration allows Assistant Medical Officers such as Bakari Shemagembe to track how many vaccines are in stock, as they prepare for vaccination sessions in their clinic or community. With colleagues, they can coordinate stock levels and order new supplies. 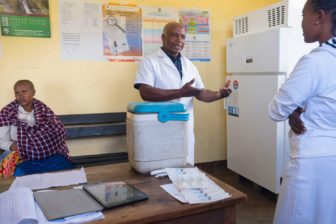 Photo: Gavi/Hervé Lequeux. EIR system helps Bakari Shemagembe to track how many vaccines are in stock.

That helps them plan ahead, ensuring they have enough vaccine doses to immunise all children that attend, regardless of how far they have journeyed. Meanwhile, Dr. Dafrossa’s team can manage vaccine stock levels across the country, anticipating where demand will occur, reducing stock-outs and wastage.

The EIR has been so successful that the wider Tanga region is now embracing these digital platforms. By 2019, Tanzania plans to have implemented EIR across the country.

Shemagembe says he could never go back to a paper-only system. Because the introduction of the electronic registries now means that each time he comes across an infant, whether they have walked three hours to his clinic or if he meets them out in the field, he can be confident in knowing what vaccines that child needs