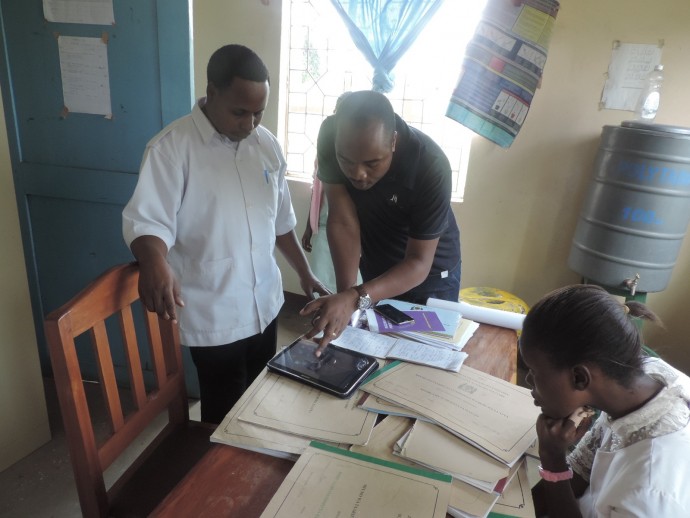 Mareu village is situated 50 kilometers from Arusha town in the King’ori ward. The village is four kilometers from Mareu health center, one of four health centers part of early testing during the BID Initiative’s phase zero. During this phase, interventions were tested and fine-tuned to ensure their relevance and appropriateness for other districts in Tanzania.

After the BID Initiative officially launched in our pilot region, Arusha, Mareu health center began using the electronic immunization system to track children and their vaccination records, which involves registering the child and maintaining complete information about vaccinations received and upcoming doses due.

Paulo Urio and Emmanuel Ahungu are nurses in Mareu and champions of the BID Initiative. Their passion for the new electronic registry system is evident as they speak about their experiences so far and the challenges they’ve faced. They have been using the new system for about four months now and describe the experience as “exciting.”

Describing the importance of collecting and maintaining data, they said the system gives their health center visibility into which children should arrive for vaccination and when, and they now have information about where to find them and how to contact their caregiver if they didn’t show up.

Paulo and Emmanuel are also both in a WhatsApp group composed of their peer health workers at neighboring facilities. This group enables them to share experiences and challenges related to transitioning to and using an electronic information system, as well as discuss other problems such as vaccine supply stock outs and working with an unstable internet connection.

Also, because each child is identifiable with a barcode affixed to their child health card, it has been easy to recognize children outside of their catchment area and to get instant information on the child’s vaccination schedule, making it possible to serve more children in a shorter period of time.

“At first, parents were wary about the sticker on their child’s health card, but we educated them on the importance of barcodes, encouraging caregivers to keep the cards and stickers safe, as it makes it easier for us to serve them. They have been supportive of the new system and are happy that the government is improving service delivery within the immunization sector,” Paulo said. “It has been a great experience so far, and we are still learning and teaching other health workers in the center.”