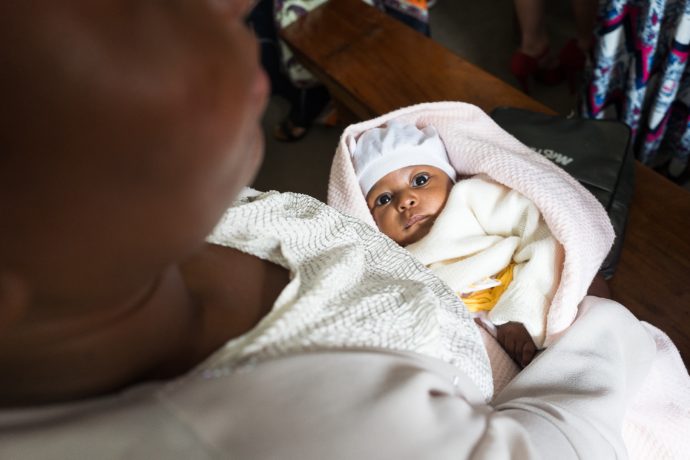 Salome Mbegela was sifting through immunization records when she first noticed a discrepancy – a slight uptick in the number of children who had recently missed vaccines. “Defaulters” as they’re often known, are not uncommon in Arusha, Tanzania, where Salome is a reproductive and child health (RCH) nurse. Mothers often encounter long wait times at clinics, vaccine stock-outs that require they come back another day, and a burdensome commute to the nearest health facility.

The fact that one or two children had missed a vaccine, among the more than 50 children most high-volume facilities see every month, wouldn’t raise concern to the untrained eye. But to Salome, the uptick was worrying. She pulled out her phone and called each child’s mother. When she couldn’t get through to them, she called the local community leaders to track them down.

“By reviewing the data, we’re able to retrieve all the children who were due for that vaccine and since the system collects their contact information, it was very easy to get in touch with them,” explained Salome, RCH Nurse in Charge at Meru Hospital in Arusha, Tanzania of a series of data tools that have converted her into a data sleuth. “It would be impossible to track them if we were using the old paper system.”

Finding meaning in a sea of numbers

Busy healthcare workers like Salome track immunization coverage rates, contact information for patients and their families, and medical stock, all while seeing and treating patients. Thanks to a five-year effort, called the BID Initiative, they’re also learning how to access and use the data they collect.

The BID Initiative is working to increase immunization rates by improving data quality and fostering a culture of data use. The initiative, led by PATH, is a country-driven effort in Tanzania and Zambia to roll out a series of tools and interventions, including electronic immunization registries (EIRs), data-use campaigns, and barcodes or QR codes on child health cards.

With no feedback loop and no means to process and analyze this information, health workers often felt like they were blindly collecting information to meet district and regional targets. Had the clinic seen more patients than last month? Why the sudden surge in defaulters?

“Before BID interventions were introduced, data collection was the order of the day,” recalls Salome. “We would work to collect data and [wouldn’t understand] what the data was telling us.” 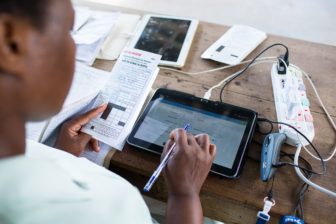 So when Salome and her peers were provided with the tools to make sense of these numbers, they didn’t limit themselves to immunization. Data visualization tools make it easy for health workers like Salome to understand their individual and facility performance. Clean graphics, colors and symbols designed even for low-literate audiences, track coverage rates and indicate when a certain service, such as the second or third dose of a vaccine, is overdue.

Salome felt a connection to the numbers she was collecting. They weren’t just statistics, but the names and faces of her community. Making data more pervasive and accessible isn’t enough. The BID Initiative is working to foster a culture of data use in which HCWs are incentivized and enabled to access, analyze, and interpret data. And though BID is focused first on immunization, there are implications for other health areas.

A pattern in the numbers

Meanwhile, in a lab not far away Graciano Epimarck is a lab assistant at Kikatiti Lutheran Dispensary in Arusha, Tanzania. Three days a week, he works at his local clinic. As a lab assistant he is surrounded by data – in the charts, tables, and reports he regularly generates.

Graciano never thought much about the numbers in front of him. They were merely a part of his routine, until he was introduced to the BID Initiative, and a series of data use and data quality interventions that changed the way he viewed these numbers.

After a while, Graciano began to see trends in other health services. It was then that he noticed a spike in urinary tract infections (UTIs) among the facility’s female patients. The dispensary expanded its educational outreach as a result, and started addressing personal hygiene within each clinic visit. In response to the surge in cases, the dispensary also began testing more consistently for UTIs.

“I have learned a lot from working here, and the most interesting part is how to read, interpret data and make decisions from the findings. That culture was never there before,” explains Graciano.

Real-time data has the potential to improve decision-making, so that health care workers know which patients to prioritize, where additional outreach may be needed, and where they are falling behind in certain targets.

Salome remembers reviewing reports for the reproductive and child health clinics in Arusha Region, when she noticed a discrepancy in the number of facility deliveries at one clinic. One large facility hadn’t seen a single facility delivery in months, and yet another neighboring facility, despite being much smaller, had witnessed eight in the same timeframe.

The discovery prompted Salome to investigate facility fees. “I found out that the bigger facility made them pay for the service, and the smaller one was delivering for free,” she recalls.

Whether it is investigating malaria trends, or noting a surge in UTI cases, health workers are seeing data in a new light. By reframing data as information, and the data culture as one in which all health workers can and should participate, data has begun to resonate with health care workers at all levels, as a powerful tool that helps them better do their jobs.

“We have been given the skill of data interpretation,” says Salome, “and we now understand the decisions we need to make from the information [we collect].”