Barcodes are beginning to stick

A mother removes a sticker from her child’s health card. The act in and of itself seems harmless enough, but the motivation at the center of her decision is what the BID Initiative is not only trying to determine, but influence.

On a recent trip to Arusha, Tanzania, I had an opportunity to reflect with the BID Initiative team and nurses at Ngaranaro Health Center. Shortly after we introduced the immunization registry and the accompanying barcodes, we observed and listened to health workers telling us that mothers were removing the barcode stickers affixed to their child’s health card. The reasons included confusion as to what they were used for, objections from the family, or even linking the barcode to freemasons.

In response, the BID Initiative team quickly mobilized to develop communications materials, including  posters that were distributed to the health centers and talking points tailored to help the health workers better explain the introduction and purpose of the barcode stickers. 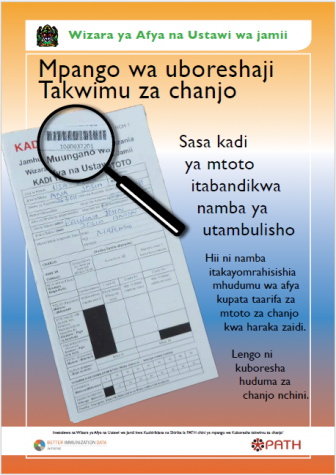 Translation reads: Now child health cards will have an identification number (barcode). This allows nurses to simplify processes and get a child’s vaccine information quickly. The aim is to improve immunization services in the country.

Education and raising awareness were at the center of our response strategy. The nurses at Ngaranaro promptly adopted these resources and devoted part of the daily health education session to talking about the barcodes and their benefits when placed on the child health cards.

And while the structured discussion helped educate mothers who were present during the early morning health education session, nurses also took to a more targeted approach when a mother presented a card that had a barcode removed. Despite having a tremendous queue of children waiting for immunizations, they would take time to discuss the barcodes with the mothers and work with them to ensure they understood the significance of replacing the barcode sticker and making sure that it stays on the health card.

This strategy proved to be quite effective as Ngaranaro sees over 100 children per immunization day. Therefore, the efficiency with which they can process each child is paramount. In talking with the nurses during my visit, they mentioned that the issue with the barcodes seemed to be diminishing; moreover, the mothers we spoke to also seemed to indicate that they had limited reservations to the introduction of the stickers. We’ve also heard about growing acceptance of barcodes in other facilities, including the Mareu health center, 50 kilometers outside of Arusha.

Sharing Ngaranaro’s experience with other health centers, particularly high-volume facilities, will hopefully will prove beneficial as they prepare to introduce the barcodes as part of the BID Initiative’s continued rollout.